Book Review and Giveaway: Carol of the Tales and Other Nightly Noels 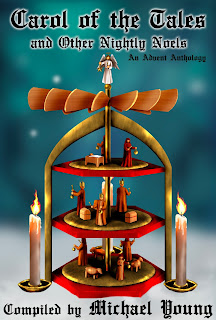 Carol of the Tales and

Christmas carols capture the spirit of Christmas, and Carol of the Tales and Other Nightly Noels brings beloved carols to life like never before. Throw your cares away with the tales from sweet silver bells. Find out how Santa Claus dabbles in time travel, and feel the redemption of a dying wife's parting Christmas gift. Experience all this and more in these heartfelt, entertaining tales donated by a team of authors from across the country, working together for a good cause. The proceeds from the sale of this book will be donated toward Autism research and advocacy.

Carol of the Tales is the 2nd book in the Advent Anthology series. Both anthologies are available in paperback and Amazon Kindle formats from Amazon.com.

To kick off the release of the second anthology, a Christmas concert will be held at American Fork Junior High on December 7th, 2013. The concert will feature the Saltaires Barbershop Chorus. All proceeds from this concert will be donated to charity as well. Purchase: Tickets for the Concert: https://tickettool.net/en/index/eventpopup/b54dab4bd0a13fa6975068f4784dfaa5

Use the rafflecopter below to enter to win wonderful prizes, such as tickets to the concert and copies of the anthology.

Other Blogs on the Tour:

Posted by Eugenie Catherine Stoll at 12:00 AM No comments:

"I bear witness of that day when loved ones whom we knew to have disabilities in mortality will stand before us glorified and grand, breathtakingly perfect in body and mind. What a thrilling moment that will be! I do not know whether we will be happier for ourselves that we have witnessed such a miracle or happier for them that they are fully perfect and finally 'free at last.' Until that hour when Christ's consummate gift is evident to us all, may we live by faith, hold fast to hope, and show 'compassion one of another.'"

The Kindness of Others

It was Sunday afternoon. We were in our usual spot. While the rest of the congregation enjoyed sacrament service from the chapel, we occupied the foyer. Emma ran around gleefully, enjoying the independence that comes with being two. David was strapped into his blue Graco stroller. The one we used for him when he was a toddler, now a few sizes too small. His lanky five-year-old legs sprawled past the foot rest and touched the floor. Although a tight fit, he was contained. Our only assurance he wouldn’t make a mad dash from the building.
He was chewing a small, white towel. The one we used to manage his chewing compulsion and keep his Sunday shirt from developing holes.
Jeff, an especially kind man in our ward, passed by. After greeting Rob and I, he hunched down in front of the stroller and attempted to connect with David. Immune to his attempts, David stared away.
Jeff then picked up the dry end of the towel hanging from David’s mouth, and put it in his own mouth. David’s eyes widened with delight. Jeff now had his full attention.
Together they played a game of tug-of-war, each clenching a corner of the towel between their teeth.
Rob and I smiled at each other and then we laughed as the game ended. David took the well-soaked, soggy corner from his own mouth and held it up to Jeff’s—rewarding him with his favorite oral companion.
Not only had Jeff taken the time to connect with David, but he’d won his heart.
I loved Jeff for loving David.
When people are kind to David I feel Heavenly Father’s love for me. It’s easy for others to look away and pretend they don’t notice him. Some refrain from interacting with him out of feeling awkward or uncomfortable. They politely keep their distance out of not wanting to interfere or give offense.
Then there are those who amaze me. They go out of their way to interact with my son, even when he doesn’t respond or tries to avoid them.
I feel God’s love through their kind actions.
Posted by Eugenie Catherine Stoll at 6:06 PM 3 comments: