―How a Mother Found Hope, Healing and Divine Purpose Raising a Disabled Child

As the mother of a disabled child, I've been the recipient of many gifts. Some of the greatest of these gifts have been spiritual. My mind has been enlightened with increased understanding and my soul has been expanded with greater faith, as I've searched to understand God's purpose for my son, David's, disability. Blessed in Weakness  is a compilation of the spiritual experiences I've had and the truths I've learned raising a disabled child.

Although there are still many things I do not know or understand, I can say with surety:

I've tried to imagine the scene in the pre-earth life when I was called to be David's mother. How honored and humbled I must have felt knowing I'd be given this special calling.

It is a privilege. 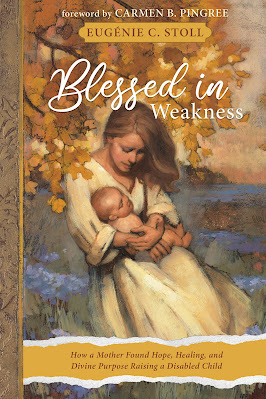 Foreword by Carmen B. Pingree

"This inspiring story epitomizes the paradoxes of raising a severely disabled child: unanswered questions and remarkable insights, painful rejections and startling acts of service, agonizing losses and compensatory blessings, unfulfilled dreams and unexpected miracles. Parents, neighbors, teachers and strangers will be affirmed in hope, compassion and the meaning of life and love."
WENDY ULRICH, PhD

Available at AMAZON.COM in paperback and ebook

Posted by Eugenie Catherine Stoll at 6:32 AM No comments:

I scrolled down my feed a little further to make sure of what I was reading.

Trisha passed away? That can't be right. She's only 2 years younger than me and the mother of three.

As I continued to read, the reality of the shocking news set in. She really was gone! Taken unexpectedly and without warning.

As the reverberating echoes of WHY resounded through my head, a rush of warm, happy memories came to life. Remembrances of Trisha's smile and wicked sense of humor, her vivacious personality and infectious energy. Her warmth, kindness and generosity.

I was blessed to serve as Trisha's mission companion for a few months in East London (Cape Town, South Africa Mission). She brought laughter, love and joy to all she did. My heart aches for her family and today I fondly honor the memory of our time together.

To know Trisha was to love her! 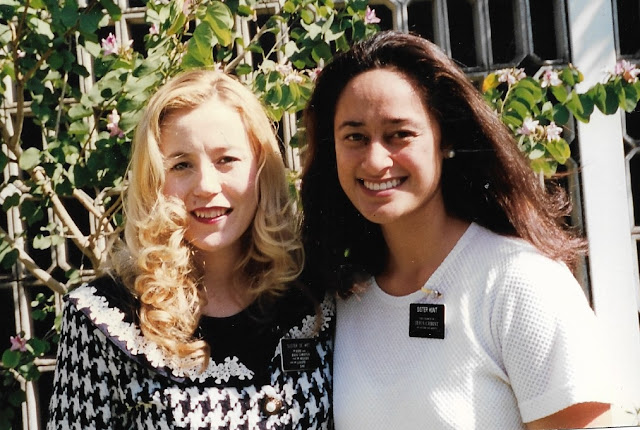 (I'm on the left, Miss Samoa is on the right) 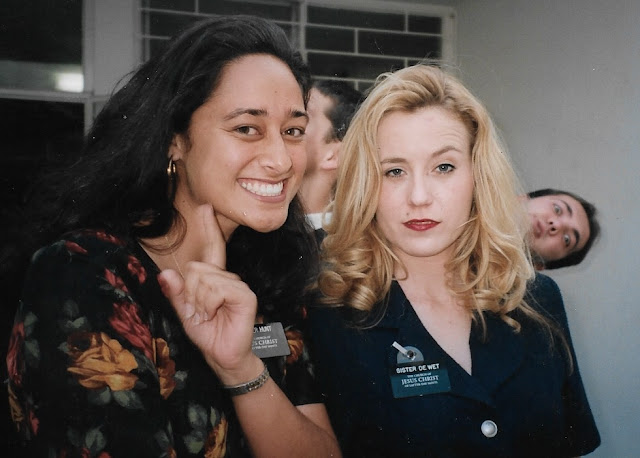 (Trisha's smile could light a thousand stars)
Trisha and I were invited by the branch mission leader to sing for a missionary fireside. We politely declined, but he persisted, thinking we were just being humble or modest. He had a hard time believing us when we told him we were not good singers. As he continued to put the pressure on, we finally explained to him we had been blessed with good looks and not singing voices (This was not entirely untrue. Sister Hunt was a real life beauty queen and the AP's had crowned me with the title of, Worst Singing Voice of all the Sisters in the Mission).
After hearing of where our talents lay, the mission leader quickly abandoned the idea that we were modest or humble. At the start of the fireside he announced to the congregation that he had invited the sisters to sing, but they declined because "they thought they were too good looking to sing". Trisha and I just rolled our eyes. . .
If there was a theme to our companionship, it was hard work and chocolate. Trisha was discovering the world beyond Hershey's and we formed an instant bond over Nestle and Cadbury's. Trisha wasn't afraid to work hard and wanted to give it her all. She asked me to take up the challenge of working a 70 hour week. We spent many hours pounding the streets of East London and knocking on doors.  When we were out tracting, Trisha loved to talk about her wedding plans. She told me about who her bridesmaids would be, what color they'd wear and how she'd name her first girl Hannah. All the while denying my prediction that she would marry Elder Ryan Paddock.

(I'm standing with the future Mr and Mrs Paddock) 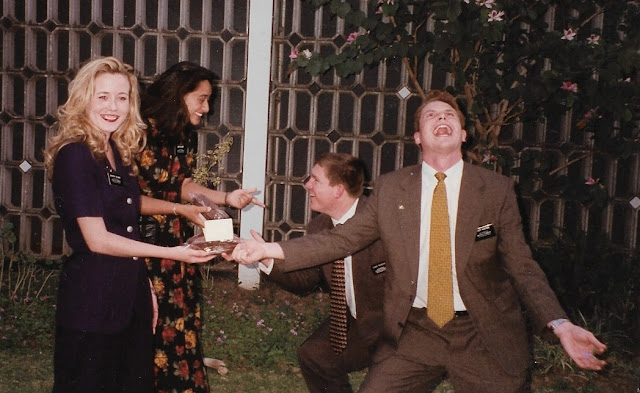 (I think Ryan is proposing to Trisha)
Trisha and I heard a lot about the Sister Peggy Dinner Appointment from the elders. We were especially tired of hearing about how the sisters had never been invited to her house. Trisha and I decided we needed to do something about that! I pulled out my hand-me-down recipe for brownies and Trisha got to work making them. It turns out Sister Peggy loved chocolate just us as much as we did. Needless, to stay she insisted on having us over for dinner. (Sister Peggy and a game of rummy)
Trisha's beautiful smile will live in my heart forever! There's something special about the friendships I made while on my mission. The time we spent together was relatively short, but the depth of love I have for these people is real. The Spirit cemented these bonds with an extra measure of love.
There's also something special about the strong women who choose to serve missions. And Trisha was no exception. She quickly became a leader in her community and a pillar of strength and kindness to many.
Thank you for the happy time we spent together. When I see you on the other side, I'll sing if you'll make the brownies! 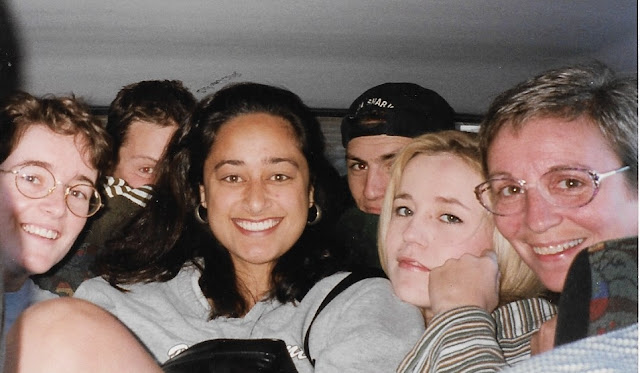 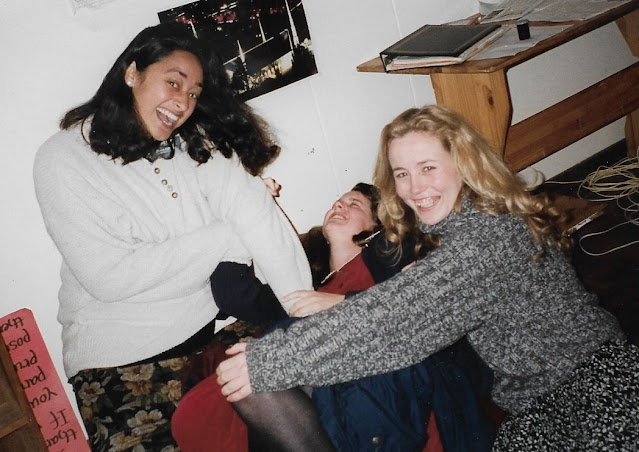 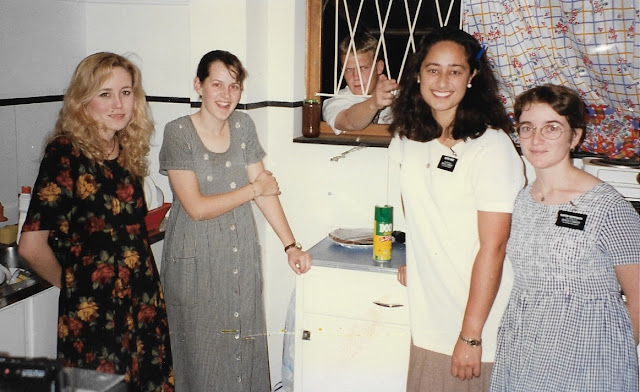 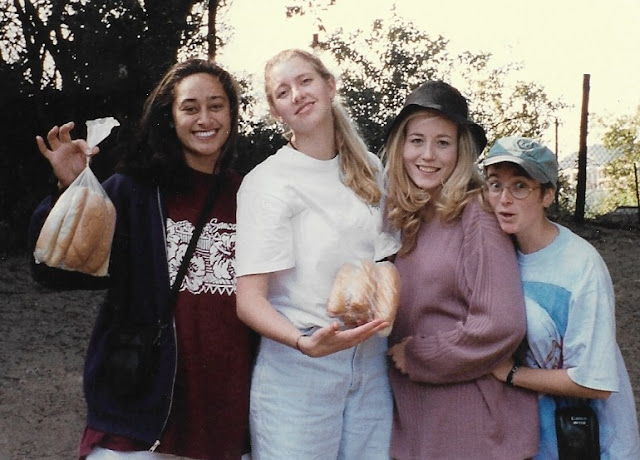 Eugenie Catherine Stoll
Eugenie traded sunny South African skies for cold Utah winters when she came to study at Brigham Young University. She completed a master's degree in Social Work and is a Licensed Clinical Social Worker. She specialized in working with incarcerated women and treating chemical addiction. She met her husband Robert, a Marriage and Family Therapist, when they worked together as co-therapists at a student internship. They have four children and her greatest education has come from raising a severely disabled child. She enjoys writing and has written inspirational pieces for the Ensign, theliahonaproject.net and churchofjesuschrist.org. If she has any free time she can be caught sleeping, shopping or eating expensive chocolate.